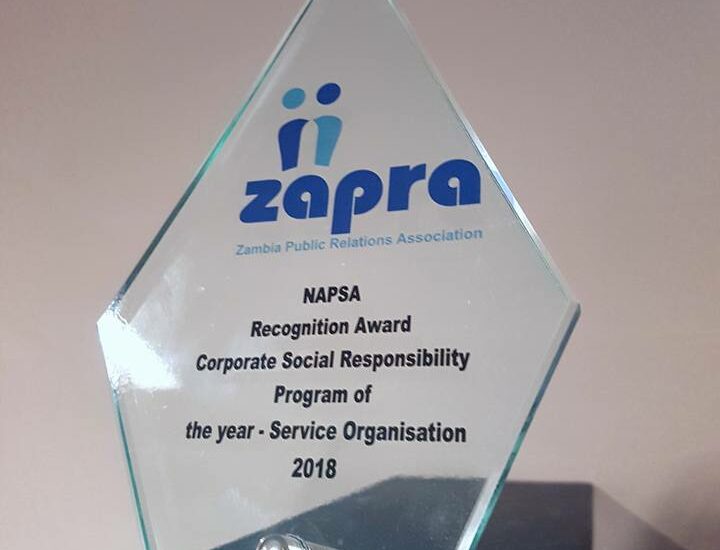 The Zambia Public Relations Association (ZAPRA) has awarded the National Pension Scheme Authority (NAPSA) two awards for the Authority’s demonstrated commitment to the upliftment of social and economic wellbeing of the people and for an effective Public Relations campaign respectively. The Authority has been awarded the Best Corporate Social Responsibility – Service Organisations and Best Public Relations Campaign of the year 2017.
Commenting on the awards, Mr Yollard Kachinda, Director General, NAPSA thanked the Zambia Public Relations Association for recognizing the effort the Authority was making to uplift the wellbeing of the people in the community through its Corporate Social Responsibility (CSR) programmes and in promoting effective Public Relations practice. “As a social security institution formed to provide social security coverage to the people of Zambia, we are also cognizant of our responsibility to support the community through social investment. This is a deliberate initiative that we have made part of our corporate
strategy as a way of conducting our business as a responsible corporate citizen. I would like to thank the Zambia Public Relations Association for recognizing this effort as well as our commitment to promoting effective communication with our stakeholders. This will motivate us to do even better,” he said. The Zambia Public Relations awards are aimed at recognizing the efforts being made by various institutions in Public Relations and Communications among other aspects of business. NAPSA was recognized for its robust CSR programmes in support of health, education, entrepreneurship, sports art and culture as well as environmental sustainability. The Authority was also awarded for the effective rollout of the eNAPSA. Recently NAPSA developed and rolled-out the eNAPSA, an integrated web-based e-service portal through
which employers and employees are able to transact with the National Pension Scheme Authority online via the Authority website. The launch of the product was accompanied